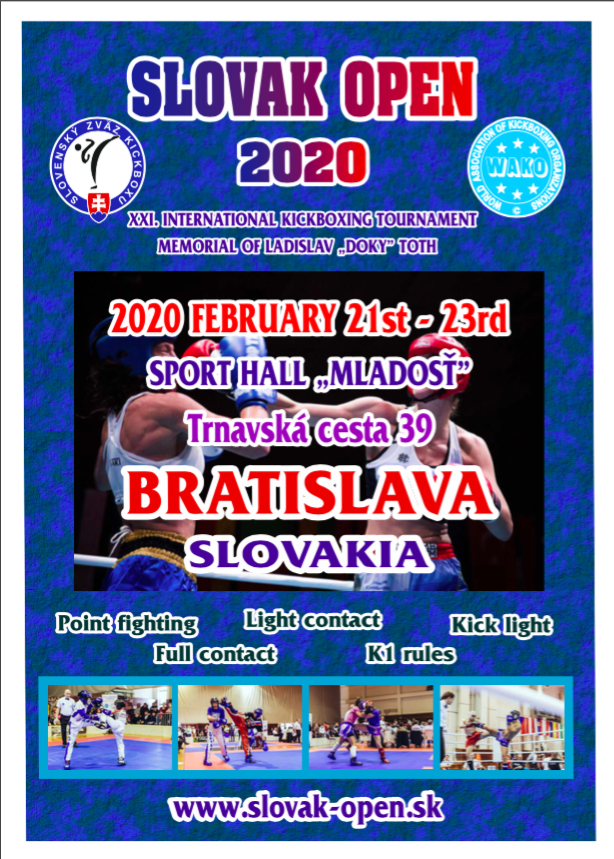 Slovak Open 2020 was already 21st anniversary organized by Slovak kickboxing Union. The tournament was held last weekend on 21st-23rd of February in sports hall MLADOST, in capital city BRATISLAVA, Slovakia. This event during two days successfully hosted fantastic number of 460 fighters with 826 starts from 90 clubs, 12 countries!  The first day of Slovak Open belonged mainly to all categories of cadets and juniors in the disciplines KL, LC and PF and also senior categories in PF on 8 tatami. Due to the very big interest in ring sports, disciplines K1 and full contact, Slovak Open started already in 2 rings with elimination fights and final of juniors disciplines during Saturday. Sunday was running on 4 tatami with categories LC and KL seniors and in  two rings with semifinals and finals FC and K1.  At the tournament we could see excellent performances and fights with amazing power, that can only be seen in the World or European Championship finals! All teams supported their fighters with strong emotions and applause, which brought a great atmosphere in the sport hall Mladost during the tournament. Behalf of Slovak kickboxing union, our president Peter Onuščák and Slovak Open organizing committee 2020, We would like to THANK ALL teams, coaches, fighters who participated on Slovak OPEN 2020 from the Czech Republic, Hungary, Ukraine, Poland, Austria, Serbia, France, Belarus, Russia , Israel, Croatia and Slovakia. Huge Thank belong to also ALL referees  for their great work! Of course, our thanks go to the organizing committee and team of volunteers. Without all of YOU we couldn't make such a successful International kickboxing tournament in Slovakia!

Congratulations to all winners for theirs amazing fights, which moved SLOVAK OPEN again to the next level!

We hope to seeing You again next year on SLOVAK OPEN 2021!